Yogurt probiotics are being studied by Researchers for their ability to treat a range of conditions from eczema to inflammatory bowel disease using beneficial micro-organisms. The science to prove its efficacy, however, is tricky.

Hitherto, scientists now know that some of the millions of microbes that populate our guts are beneficial. "It's incredibly clear that these bacteria in our gut are not just innocent bystanders, hanging out," says Athos Bousvaros, a pediatric gastroenterologist at Harvard Medical School.

But it's not clear which live micro-organisms, or yogurt probiotics, are helpful, says Bousvaros. 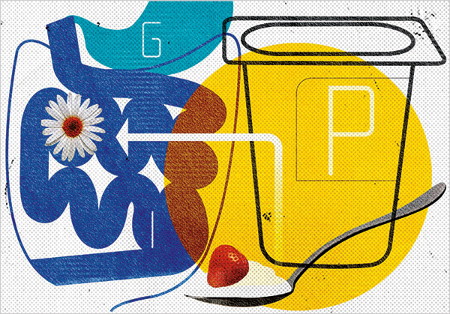 Lots of people have turned to yogurt probiotics, with the belief that the bacteria added to the milk as part of the fermentation process are helpful. And there's some evidence that yogurt affects digestion.

Many others are trying specialty yogurts or supplements made with specific strains of probiotics. There are hundreds of products on the market.

"Most of yogurt probiotics products have never been studied," says Kirsten Tillisch, a gastroenterologist at the University of California, Los Angeles. "And they all contain all different kinds of strains of bacteria."

It's not clear whether different people need different strains, or whether some strains are more beneficial. "We just don't know," says Tillisch. So she tries to steer her patients who are eager to try yogurt probiotics products that have some clinical research behind them.

Increasingly, researchers and yogurt-makers are trying to nail down specific benefits. For instance, a probiotic called Align has been studied in people with irritable bowel syndrome. "There have been a couple of studies that have shown, in irritable bowel syndrome specifically, that people do better [when they consume it]," says Tillisch

The probiotic yogurt Activia has also been studied, though that research has mostly been supported by its manufacturer Dannon. Activia contains a trade-marked probiotic culture called bifidus regularis which supposedly helps regulate the digestive system.

Tillisch says during these studies the participants were typically consuming the yogurt two or three times a day. She wants her patients to have realistic expectations, especially if they're only eating it occasionally. "I don't know if having yogurt once in a while will make any difference at all," she says.

Two recent studies, including one conducted by researchers at the Rand Institute, have found evidence that probiotics can reduce the risk of antibiotic-related diarrhea. And a recent Cochrane Collaborative analysis found that people who eat fermented foods such as yogurt or take probiotic supplements were somewhat less vulnerable to upper respiratory illnesses, including the common cold.

Nailing down the specific benefits of probiotics will take years and much more research. And this includes an interesting line of inquiry into a gut-mind connection, exploring the idea that we might be able to change how we feel by changing what's in our guts.

This gut-brain connection has been demonstrated in animals.

"Pretty dramatic effects can happen in animals when you change their gut flora," says Tillisch. "If you take an animal with inflamed gut, and give them a probiotic, they don't act anxious anymore."

Tillisch and her colleagues recently completed a very small, preliminary study involving healthy women. After taking probiotics, brain scans found changes in the way women responded to a series of images of angry or sad faces.

"At the most basic level, we show that by changing the bacteria in the gut, we change the way the brain responds to environmental cues" says Tillisch.

It's intriguing stuff, but it's also early days. So, it's not as if we can assume that your morning yogurt will melt away stress. Tillisch says she hopes to keep testing this theory with future studies.

Have your say about what you just read! Leave me a comment in the box below.

Return from Yogurt Probiotics to HomePage